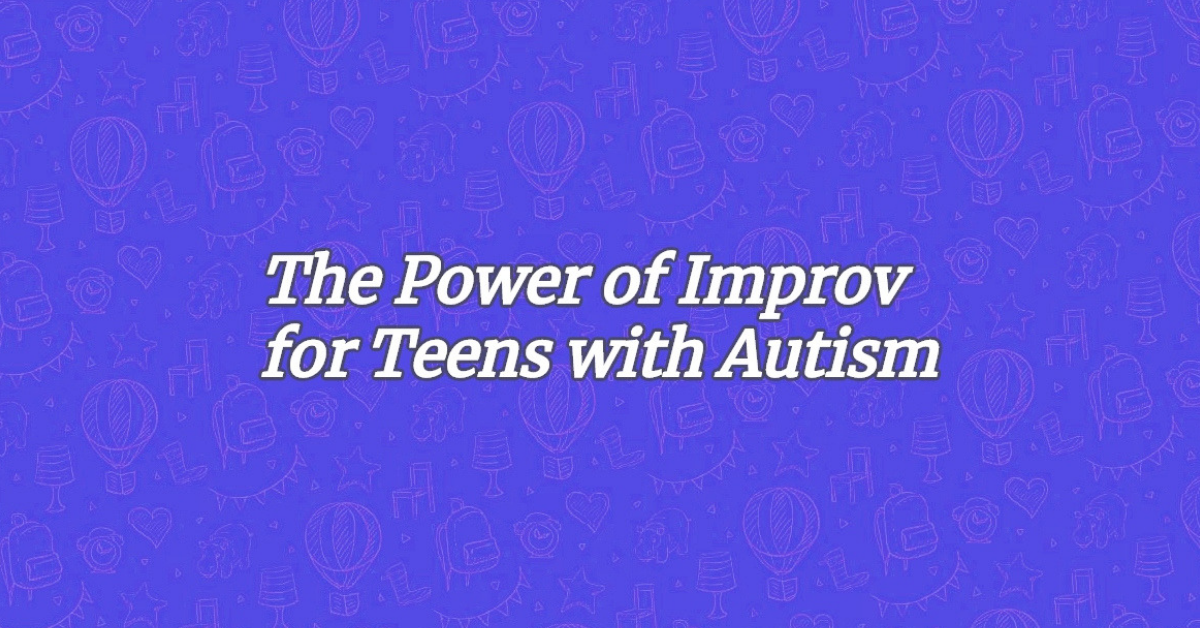 “Just be yourself!” Try telling that to a teen with autism! Much of the time when they’re just “being themselves” it’s considered wrong. They’ve been told that the way they pass papers in class, answer when called on, eat lunch or make a joke is “inappropriate,” “argumentative” or just plain “weird.”

But what if there was a new entry point into being yourself for teens with autism?

As it turns out, the world of improvisational (improv) theater is rooted in one of the most powerful tools to help kids just be themselves. “Yes, and…” (in sharp contrast to “Yes, but….”) is a technique that is at the heart and core of improv theater. As a psychologist working with kids on the spectrum, I’ve used my background in improv for years to support social skills. “Yes, and…” works and it’s fun.

For creativity and reciprocal communication to flow between two or more people, agreeing is better than arguing. With students we test this by starting with the “Yes, but” style. Players pair up with the goal of planning a party. The first player says, “Let’s have tons of balloons!” and the other player says, “Yes, but they’re so hard to blow up, let’s have huge piles of crepe paper instead.” Then the other players say, “Yes, but crepe paper just gets squishy, we should make a big sign with glitter.” With each new offer, the idea is rejected and the discussion quickly collapses into an argument, going nowhere fun.

Then we try the “Yes, and” game. In the same pairs, every offer (such as the balloons), no matter how silly or disliked, is enthusiastically met with “Yes! and…” with new ideas added to build on what is heard (e.g., “We’ll fill them with water and throw them at everyone!”). Invariably, this new game ends in wildly improvised worlds of sheer goofiness and laughter.

“Yes, and…” is not a new improv game. We’re learning in the psychology world that the underlying concept of radical acceptance can be used to frame how to be with others outside of games. The acceptance model of improv demonstrates a way to “just be yourself” in social situations without needing to be “right” or argue.

Teaching kids with autism how to agree grounds them in the actual experience of just being themselves with others, not trying to understand an explanation of how they should behave.

I like to teach this technique to families, teachers, and counselors because it’s easy to practice and fun to use. For people on the autism spectrum, who may be used to defending their personal positions or are often left feeling misunderstood, this improv strategy creates a feeling of belonging and reciprocity.

Starting from a position of saying an internal “Yes” to what a teen with autism is doing generates an opportunity for shifting a stressful dynamic into positive engagement. How? It promotes flexibility and creativity in ourselves. When we accept behaviors as offers, we are acknowledging that we don’t know all the answers and learn through what emerges, what is improvised, and what is in the moment. We are modeling and experiencing “being ourselves” without being stuck in preconceived ideas about right and wrong.

Exciting new research is emerging on the effects of improv theater techniques in helping kids on the spectrum be their best selves. It builds emotional awareness, reciprocal interactions, social cognition, and imagination. Everything we can do to help kids say yes to the offers of others and focus on saying yes to the offers of our kids pays off in building real confidence, self-acceptance, and a sense of connection. Let’s work hard to stop working so hard and just say yes!

Carol Moog, PhD, is a licensed psychologist with over 40 years of experience, specializing in helping people on the autism spectrum. Her work is relationship-based and geared toward discovering unique personal resources, clarifying goals and building social skills. Founder of ImagineAct, Dr. Moog uses her training and experience as a theater improvisor/actor, professional harmonica player and marketing communications consultant in her practice and in her research. Dr. Moog (www.carolmoog.com) is co-author of The Autism Playbook for Teens with Irene McHenry PhD.